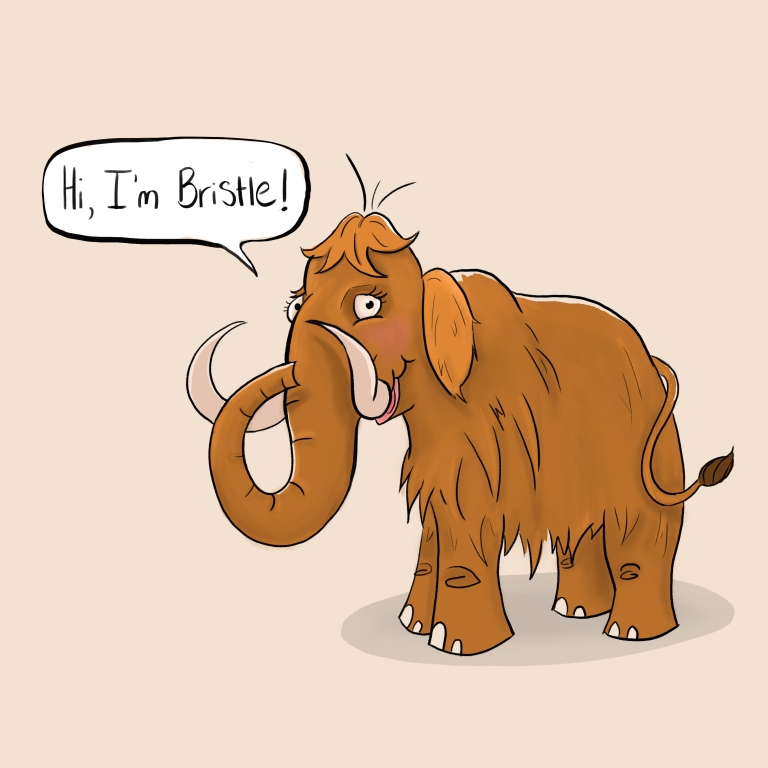 Hi, I’m Bristle the mammoth! I was found in the fall of 2015 in a soybean field in Chelsea, Michigan by a farmer and his friend when they were digging a hole for a pipe. As they were digging, they suddenly realized that they could see bits of bone sticking out of the dirt and stopped to investigate. They thought the bones might be something unusual so they sent an email and pictures to a scientist at the University of Michigan named Dan Fisher, and invited him out to look at their discovery. Dan knew right away that they had found a mammoth! Finding a mammoth in Michigan is something special; in fact, there are only 10 other similar sites, whereas scientists have discovered almost 300 mastodon sites in the state.

The farmer needed to use his land, so he could only give the scientists one day to excavate the site. Dan Fisher quickly assembled a team of students, and the very next morning they arrived to remove the skeleton. The bones were lying nearly 10 ft below the surface in sediments of an ancient pond. As they carefully excavated my remains, they photographed and documented the position and orientation of each of my bones so they could study how I got there. The bones they found included several ribs, vertebrae (bones from my back), and most importantly my skull and tusks! 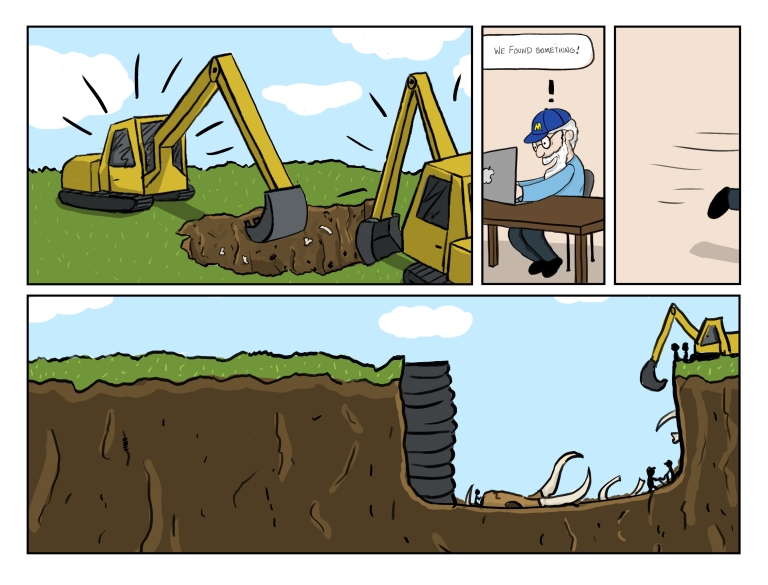 Once the team had removed all they could in a day’s work, they took the bones back to the University of Michigan to carefully clean and dry them for study. When the bones were ready, the scientists realized that I was even more unusual than they thought. I lived between 10,000 and 15,000 years ago, and by looking at my tusks they could tell I was around 40 years old when I died. They noticed that my tusks and teeth were unusual and concluded that I was actually a hybrid of two different species — woolly mammoth and Columbian mammoth! Large stones were found near my body that didn’t fit with the rest of the fine sediments in which my bones were found. In addition, I was missing all but one of my limb bones, which might suggest that I was hunted by ancient humans for food and the hunters left some of my bones behind where I was killed. They think these people (who archaeologists call Paleoindians) stored parts of me for later use at the bottom of a pond. Did you know you can store meat for long periods of time in a pond without it going bad? The bacteria that grow on meat stored in a pond are similar to the ones you find in yogurt, and are not harmful to eat. Yummy! And that is where the scientists found me thousands of years later.

Dan Fisher and his team are excited to continue studying my remains. They think that I can help them solve the mystery of why the mammoths went extinct, and how mammoths and ancient humans interacted. In an effort to encourage more research on discoveries like mine, they have created high-quality 3D models of my bones that are available online, and are accurate enough to be used for scientific study. Right now the University of Michigan Museum of Natural History is designing an exhibit where I will be proudly displayed for the public, so make sure if you are in Ann Arbor you stop by for a visit!

Want to learn more? Visit http://ns.umich.edu/new/multimedia/videos/23181-washtenaw-county-mammoth-find-hints-at-role-of-early-humans or http://umorf.ummp.lsa.umich.edu/wp/ to check out the 3D models!

This Smarty Special celebrates one month of The Smarty Scoop! The information for this post came from the “Science Café,” a free event hosted by the UMMNH where the public can come meet the actual scientists who worked on the project and ask them questions. If you are in the area and interested in learning about cool research happening at the University of Michigan click here to learn about future cafés.