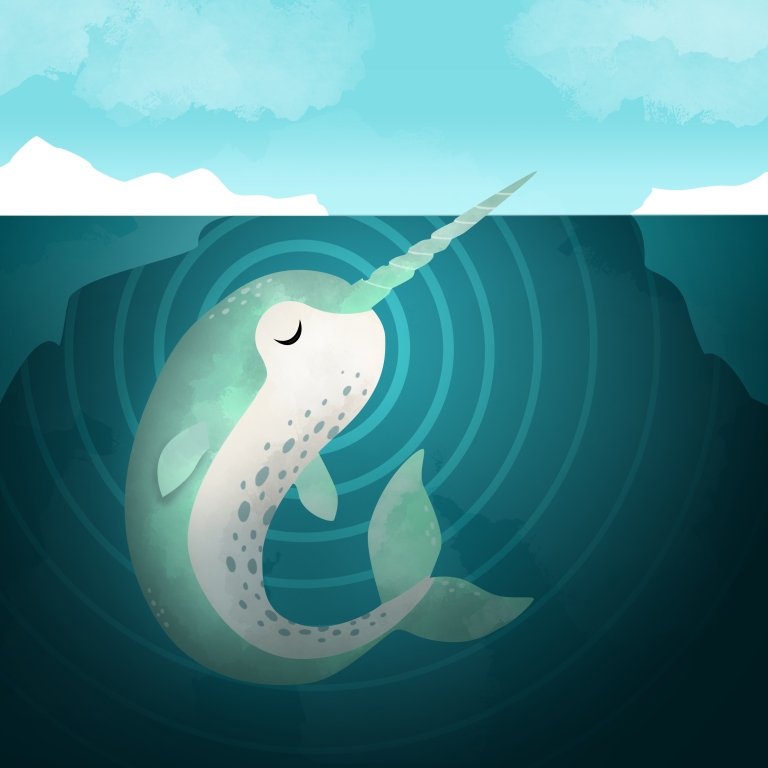 The narwhal has been called the unicorn of the sea, and it seems their way of navigating is so unusual that it’s almost mythical.

The narwhal sees with echolocation, or the ability to use sound waves to detect objects in space. The sound waves or “clicks” are produced by an organ called the phonic lips at a rate of up to 1,000 clicks per second, and are received by special pads in the whale’s bottom jaw. Each click provides the whale with a small snapshot of its environment, and when they are combined together, they create a more detailed image than any other animal on the planet is capable of producing (with the possible exception of the beluga whale). This super high resolution vision allows the narwhal to find tiny breaks in the ice where it can surface to breath, and helps it catch squid and other prey in the deep dark waters below.

The scientists at the University of Washington wanted to understand how the whales used their echolocation, so they placed special microphones (the clicks can not be heard by human ears) underwater that recorded the whales’ sounds. They discovered that the narwhals could focus or widen their beam of sound depending on what they were looking at, just like an adjustable flashlight!

Narwhals are very rare and secretive creatures, and understanding how they see in their unusual environment gives us a window into this animal’s world. It will also help us monitor how climate change is affecting the ecosystem and the animals living in these arctic climates.

3 thoughts on “The Sound of Narwhal”